In the whole wide world, nothing interests me and captures my attention more than these three things: cat, coffee, and books. My wife should be on that list too, but I’d to just keep her out of the limelight, for now. 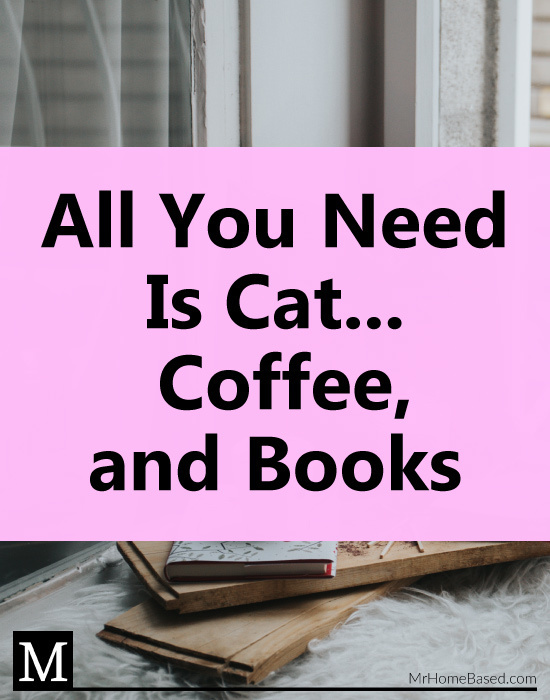 You will never find an article like the one you’re reading on my other blogs. Why? Because articles like this are hard to attract readers, and your blog is never going to make money without readers. I run my other blogs like a real business.

However, since this is my hobby blog, generating income is only secondary.

My primary goal is to explore different topics that truly interest me. You know what interests me the most? Good books, good coffee, and my cat (who happens to be a really good cat).

I love it when my cat decides to join in my coffee and book session. It completes the moment, and it is extremely satisfying. When that moment occurs, everything feels serene and perfect. And I always get that feeling that I’m truly present in that moment. It’s a very zen experience.

A moment of bliss like this was hard to come by when I had a corporate job. Sure, the hours weren’t long — it was a 9-5 job — but I always felt completely exhausted when I reached home after work. All I wanted to do was absolutely nothing. Weekends weren’t any better too and are usually spent to catch up on getting some rest.

Since I started working from home, I have felt an increased control over my life. Although the income may not be as stable as a corporate job, but the intangible benefits that come with it are priceless. One benefit is to have more flexibility on my work schedule, so I sneaked in little works breaks throughout the day to read, sip coffee, and cuddle with my cat. Studies show that strategic breaks can improve your overall productivity.

Although I love books, coffee, and my cat now, they weren’t always my favorites in the past. Our relationships have had their ups and downs. 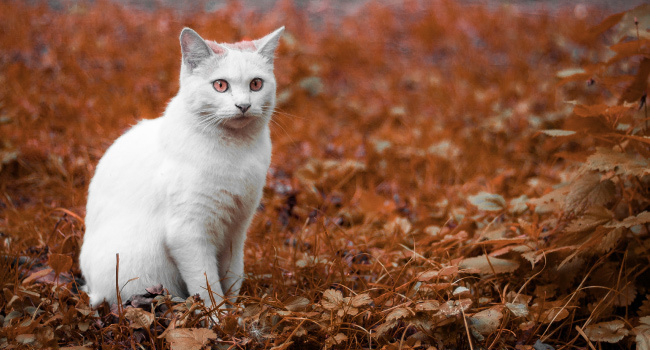 My cat was briefly mentioned in an earlier post about the benefits of having a cat for home worker.

We’ll call him Chaser (not his real name). Chaser is a 2-year-old white cat with semi-long hair. His furry tail is fabulous.

I love hanging out with him. I feel serene when I see him do his things — when he cleans his paws, when he sleeps with his belly up, or when he is excited when there are birds outside — everything he does is so natural and unpretentious.

He is a bit of a character. I supposed all cats are.

He would never sit on my lap nor let me hold him. I still try to hold him, but it always involves some amount of fighting between the two of us.

I have a feeling that he doesn’t like it too much when I give him attention without him asking for it first.

And when he comes asking for attention, he would brush against me aggressively and purrs like a loud diesel engine.

Chaser is an indoor cat. He spends most of his time at home sleeping, basking in the sun.

He gets some playtime once a day, sometimes twice a day when I’m not that busy.

He would absolutely throw a tandem if I don’t play with him for more than one day. Not unreasonable I supposed — cats get bored too.

For an introvert who doesn’t like to go outdoors that much, he is the perfect pet for me.

Some Coffees Are More Equal Than Others 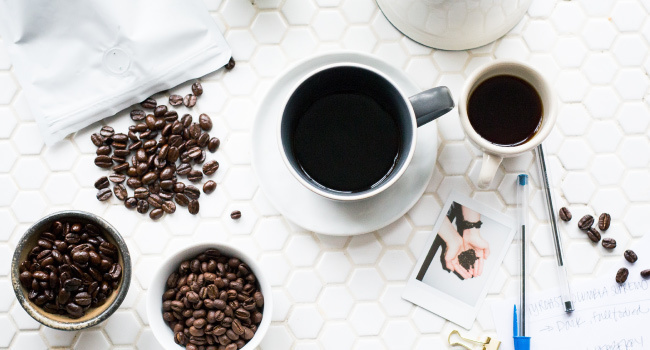 As a child, I have always hated coffee.

I thought it was aromatic, but the taste — yuck! Why would adults drink that thing?

When I was about thirteen years old, I had my first affair with a Starbucks frappucino.

It totally changed my perspective on coffee. I vividly remember the coffee being an ice blended mocha — a heavenly union of coffee and chocolate.

The sweet chocolatey taste and ice-cold temperature were perfect. I loved it!

It was (is!) expensive, so I could only afford it once in a while.

Which turned out to be a blessing in disguise — years later I was shocked to find out how much sugar is in that coffee grande. There are 61 grams of added sugar in a grande ice blended mocha, which is 69.4% more than the daily added sugar limit of 36 grams according to American Heart Association.

A number of years ago I started a one-man mobile app development company that was destined to fail in retrospect. But I didn’t know any better then.

During that time I got into the habit of drinking instant coffees — premixed coffee powder consists of milk powder, and sugar — plenty of sugar.

I should have known that it tasted great for a reason!

While the sugar content in a coffee mix is probably lower than a frap, it’s still up there in the too-much-sugar range.

Eventually, I would go off coffee entirely because it became less and less effective at boosting my energy.

Also, I was anxious and easily agitated all the time. Oh so anxious.

I stopped taking coffee after reading this article on Medium, in which the author claimed that quitting coffee has doubled his productivity.

That coupled with daily meditation and weekly yoga made me felt so zen!

Sure, stopping coffee got rid of my anxiety, but at the same time, I found it hard to concentrate on my work.

Coffee is coming back to my daily routine, but doing the same thing and expecting a different result is insanity.

I was going with a pure coffee brew this time — no sugar, no milk — just the plain ol’ black liquid of love and caffeine.

I bought a cheap french press, some ground coffee, and started experimenting.

Guess what. It worked! The return of coffee in my diet had brought a positive impact on my productivity.

I didn’t get jittery or anxious with black coffee! I concluded then that the cause fo anxiety is high sugar content.

I have been drinking black coffee for more than half a year now, and the anxiety hasn’t returned since.

Discover my secret in brewing the perfect cuppa using a French press.

Nowadays I take 1 to 2 cups of black coffee per day. One cup in the morning with breakfast. Another cup after lunch or during the afternoon tea break.

If you have a coffee-induced anxiety but can’t live without coffee, try black coffee instead.

However, I was still very much interested in learning.

And the world of books was fascinating.

Can you imagine? There are books on virtually every single topic that you’re interested to know more about.

Each of these books is written by people from different times, waiting on the shelves to speak to you, to share with you their knowledge.

One particular book that I read in college left a profound impression on me — The 7 Habits of Highly Effective Individuals by Stephen Covey.

Habits described in the book like be proactive, sharpen your tools, and be independent, became a core part of my personal philosophy.

That was the first time I realized there’s much you can learn from books other than the textbooks.

A few years after college, I was going through a rough patch in life. It was a dark, dark place — chaotic, directionless, and just plain sad.

At the lowest point in my life, it’s almost as some things are meant to be, I found this book by Viktor E. Frankl — Man’s Search for Meaning.

This book fixed me.

Frankl was a neurologist, psychiatrist, Holocaust survivor, and founder of logotherapy.

In the first part his book, he shared with us his experience in the Auschwitz concentration camp.

He was obviously in a much worst place than I was, but he never gave up hope.

His experience and explanation of the situation provided the encouragement that I needed.

In the second part of the book, he laid out a way of thinking known as logotheraphy.

Logotheraphy is the pursuit of meaning in one’s life.

Frankl argued that happiness is overrated.

Most of the time we aren’t happy or sad at all.

Why didn’t I think of that? Now that I read about Frankl, it became apparent that it’s OK to be sad.

And that it’s important to have a meaning-driven life.

Eventually, I got out of that rough spot and started living normally again.

There was a time when reading became a rarity in my life.

After work and the long commute, I was simply too tired to do anything.

I tried to listen to audiobooks during commute (I was driving), but the amount of information I was able to absorb was close to nothing.

My love for books re-ignited now that I work from home. For one, I have better control over my time and energy. The time spent on commuting previously can now be spent productively on interesting books.

I rarely read physical books anymore because e-books are so much cheaper.

Plus you can carry and switch between ebooks much easier.

Book switching keeps my interest level high at all time.

When I feel bored with one book I simply switch to another. When I’m bored with that other book I’d switch back (or to the third book).

Currently, I’m reading seven books at the same time. I’m sure things like this already have a name, but I’m just going to call this method parallel reading.

Parallel reading is quite a fun way to read, especially in this era of short attention span.

You will make more progress in books that are more interesting to you.

For books that you don’t really like — maybe the books are badly written anyway — the progress will be naturally slow.

When a book’s progress is consistently slower than other books, consider removing it from your reading list. Maybe that’s an indication that the book is just not for you.

I should do more research on this topic then write a full article on this concept. I think it will be interesting, or not, we’ll see.

For this round of parallel reading, these are the books that I’m working with and their respective percentages of completion:-

I feel that 7 books are a bit too much.

Some of the books like The Black Swan and The Lean Startup are not getting the attention they deserve not because they aren’t interesting but because I don’t have enough time.

So for the next round, I will probably work with only 5 books.

I like to enjoy a good cup of coffee when I read. It keeps my mind focused and readily absorbent of new knowledge.

What Are Your Favorite Things in Life?

I love spending time on books, coffee, my cat Chaster.

All the better if it’s a raining or snowing outside. That moment of bliss is something worth treasuring.

What about you? What are your favorite things? What do you enjoy doing?